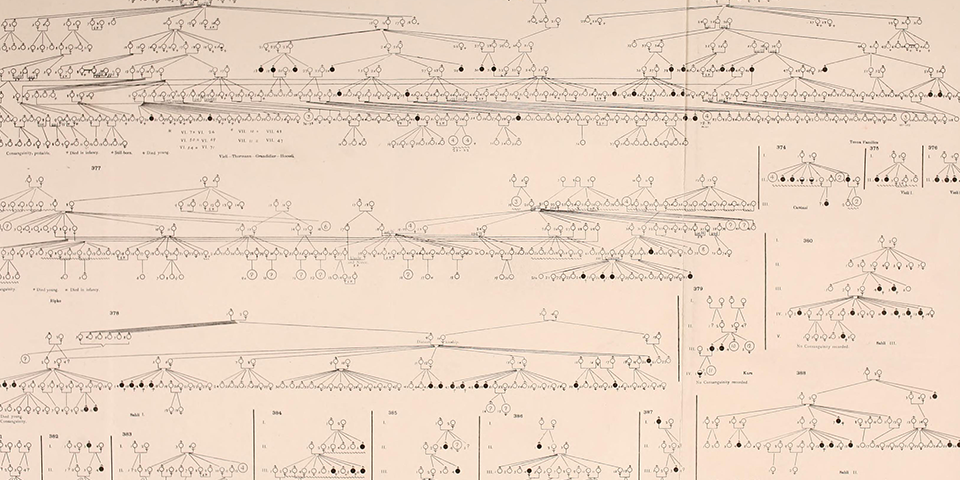 Psychiatric institutions and their assiduously systematic collection of patient data played an essential role in the formation of nineteenth-century conceptions of inheritance. Empirical and statistical evidence pointing towards the heritability of psychic pathologies in families grew throughout the 19th century (Porter 2018). By 1900, recently rediscovered Mendelian rules seemed to provide a mechanism for the transmission of properties and even promised to allow for prognoses (Gausemeier 2008). But what did it mean to be pathologically related to fellow human beings? How would parent and child become companions in disease?

The project concerns the previously unexplored topic of pathological kinship. This gap is both historiographic and historical—historiographic in so far as among the vast research on concepts of heredity there are hardly any studies that treat “kinship” as an epistemological category within the sciences of heredity; historical in the sense that the psychiatric science of heredity did not critically reflect on “kinship” as a subject but assumed it as given in nature. Thus, building on the findings of new kinship studies, one can argue that “kinship” cannot be presupposed precisely where that concept is in use (Carsten 2004).

A case study from around 1925-1928, when Ernst Rüdin directed the psychiatric clinic in the city of Basel, will show that exactly in this presumed gap were an abundance of practices to negotiate and especially produce supposedly unproblematic “kinship.” The central source base consists of patient dossiers from the Heil- und Pflegeanstalt Friedmatt, which contain admission forms including a family history and detailed genealogical questionnaires.

Such sources raise questions of the reciprocity between knowledge of psychiatric inheritance and retrospective narration; of objectivization and the production of relationships and kinship structures; and especially of the informing of medical personnel through Mendelian and genealogical diagrams of families and heredity. The project will analyze the diagrammatic dimensions of psychiatric research programs on heredity, genealogical work, and popular conceptions of kinship. This historical-diagrammatic perspective will be supplemented by historical-anthropological questions concerning both the occurrence of such icons and their absence.

Gausemeier, Bernd. 2008. “Pedigree vs. Mendelism: Concepts of Heredity in Psychiatry before and after 1900.” In Conference : Heredity in the Century of the Gene (A Cultural History of Heredity IV), Preprint 343, 149–62. Berlin: Max Planck Institute for the History of Science.